What Can Adaptogenic Mushrooms Do for You?

All mushrooms are the same, right? More than ever before, people are talking about adaptogenic mushrooms. There are many misconceptions about them, and perhaps even more questions. It’s time to set the record straight – learn more about what these mushrooms can do for you.

What are Adaptogenic Mushrooms?

There are many types of adaptogenic mushrooms. Some of the common varieties of include Reishi, Cordyceps, Lion’s Mane, Shitake, Chaga, and Turkey Tail. Each of these mushrooms has their own unique benefits.

Adaptogenic mushrooms are “superfoods.” This means that these types of mushrooms have potential and broad health benefits. Many individuals looking to improve their health, boost their immune system, or treat ailments holistically, seek out adaptogenic mushrooms.

These superfood mushrooms are available in a variety of delivery methods. For example, you can find adaptogenic mushrooms in drinks, capsules, in teas, and even powdered. Some you can even find at the grocery store.

Adaptogenic mushrooms have been thoroughly researched and a few but vital benefits have been identified. These benefits can be broken down by the specific mushroom type. As these kinds of mushrooms become more available, it’s important to understand how to differentiate products based on your individual needs.

Reishi mushrooms have been used in Eastern medicine for centuries. Traditionally, the benefits of these mushrooms were reserved for nobles and the wealthy elite. Luckily, the health beliefs of the past have sustained into the present; studies confirm the boost that reishi mushrooms provide to the immune system due to their antioxidant properties.

Cordyceps are a unique combination of mushroom fungus and caterpillars. This hard-to-find coveted mushroom has been thought to establish balance within the body. From consistent sleep cycles to energy and stamina, Cordyceps are thought to be a well-rounded and beneficial mushroom. A recent study sought to confirm these benefits, and found that Cordyceps indeed contain amino acids and are antioxidants.

There’s more to shiitake mushrooms than their delicious flavor. Research demonstrates that after regular consumption, shiitake mushrooms improve cellular function and increase gut immunity. Again, they’re not only tasty, but a good addition to your diet.

The Chaga mushroom has a unique appearance; think burned cauliflower. This parasitic fungus is found on many types of trees. One study suggests that consistent consumption of Chaga mushrooms promotes energy metabolism, which is said to boost immune health. In this case, don’t let their appearance scare you from trying Chaga mushrooms.

If you’re ready to add varieties of superfood mushrooms to your routine, look no further than our premium products. Adaptogenic mushrooms are ingredients in our Cured Rise and Cured Zen products, allowing you to feel the combined benefits of both CBD and these ancient mushrooms. 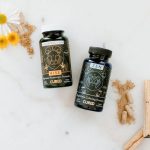 Boost Your Immune System With The Herbal TrinityEducation 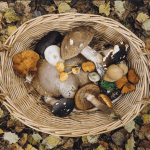 The Health Benefits of MushroomsEducation