Confused About Mushrooms? Use This Guide To Find Your Match.

Picture this: You’re hosting a Trivia Night with your significant other and a group of close friends. The spotlight is on you as everyone waits to see if you have the answer to the final question of the game. Your friends are drumming their hands across their knees in anticipation. Do you know how many species of mushrooms exist in the world?

If you need to phone a friend, allow us to step in; the answer is over one million. Most scientists agree: there are about 14,000 known and identified species of mushrooms. However, this is only about 10% of the mushrooms that exist in the world, unidentified and unencumbered. 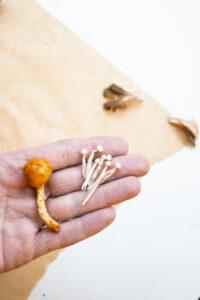 According to a comprehensive review published in 2021, about 2,006 of the known mushrooms can be eaten safely. Of those mushrooms, only 30 species have been domesticated for household and culinary use. Yet, how often do you walk into your local grocery store and find more than a few ounces of Baby Bellas?

If you have ever found yourself wondering how to venture off the beaten path and explore the fantastic world of fungi, you are certainly not alone. We aren’t afraid to admit that our love for mushrooms borders on obsession, and we’re happy to pass the torch along to you. The next time you’re craving some juicy beta-glucans, use this guide to find your mushroom match.

When it comes to mushrooms, we specialize in the medicinal (or, functional) species. In the West, mushrooms have recently taken over the health and wellness scene. However, to better understand the therapeutic relationship with friendly fungi, it’s far more advantageous to look to Eastern countries for guidance.

Traditional Chinese medicine has long incorporated mushrooms into holistic and functional regimens, which is why Cured Nutrition has taken a similar approach with our in-house herbal formulations. You can find medicinal mushrooms in our signature Rise, Aura and Zen products, as well as our recently launched energy drink, Euphoria. These mushrooms have countless physiological benefits and pharmacological actions, including “antimicrobial, anti-inflammatory, immunomodulatory, antidiabetic, cytotoxic, antioxidant, hepatoprotective, anticancer, antioxidant, antiallergic, antihyperlipidemic, and prebiotic properties.”

There are specific compounds in mushrooms that have been shown to contain the most useful bioactive potential, such as polysaccharides, proteins, terpenes, and antioxidants. Although the most apparent health benefits vary from mushroom to mushroom, these compounds are responsible for many of the functional properties.

For example, Reishi has been used to promote overall well-being and longevity for thousands of years. Its healing properties are due to two of the aforementioned metabolites: triterpenes/triterpenoids and polysaccharides. The triterpenes possess remarkable “antitumor, antimetastatic, cytotoxic, and enzyme inhibitory properties;” while the polysaccharides demonstrate “strong antiangiogenic and immune system-strengthening properties.” Together, these two types of compounds create the anti-cancer effects for which Reishi is so well known.

In addition to the anticancer activity, such as inhibiting cell proliferation and promoting apoptosis, research has also revealed the cardioprotective and antiviral properties of Reishi mushroom. Are you ready to try Reishi for yourself? You can find it in our Zen sleep and relaxation supplements!

While Reishi is undoubtedly a mighty mushroom, it isn’t alone. In fact, all medicinal mushrooms contain an array of characteristics that support wholistic well-being (in stark contrast to many pharmacological substances that often treat singular issues). 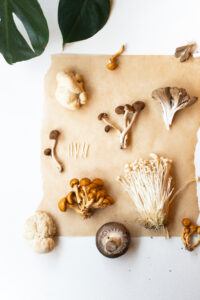 The Promise of Psychedelic Mushrooms

Unless you’ve been living off the grid and without much technology (which we aren’t opposed to in the slightest), you’ve likely heard the growing buzz surrounding psychedelic mushrooms. Once again, for good reason.

MAPS (Multidisciplinary Association for Psychedelic Studies) and John Hopkins Center for Psychedelic and Consciousness Research are paving the way. With numerous research studies performed in recent years and even more currently underway, it has become clear that psychedelic mushrooms will play a significant role in future therapies and treatments.

Psilocybin is the most widely referred to compound when discussing magic mushrooms. There are over 100 species of mushrooms that contain psilocybin, many of which belong to the Psilocybe genus. The latest research investigating psilocybin-assisted therapy has focused on several areas, including cancer patients, addiction, treatment-resistant depression, anxiety, obsessive compulsive disorder, and anorexia nervosa.

In one randomized, double-blind, cross-over trial published in the Journal of Psychopharmacology, 51 patients were given two doses of psilocybin separated by five weeks. Participants received either a low or high dose, and the total duration of participation lasted nine months. “High-dose psilocybin produced large decreases in clinician- and self-rated measures of depressed mood and anxiety, along with increases in quality of life, life meaning, and optimism, and decreases in death anxiety. At 6-month follow-up, these changes were sustained, with about 80% of participants continuing to show clinically significant decreases in depressed mood and anxiety.” Remarkably, 60% of participants showed complete remission from their symptoms.

The psychoactive effects (and therapeutic properties) of psilocybin are largely due to the 5-HT2A agonist action. “One plausible hypothesis is that the acute destabilization of brain networks by psilocybin (which may stem from receptor level effects via amplification of neuronal avalanches) may provide the opportunity to alter brain network activity in a persisting fashion.”

In other words, psilocybin-containing mushrooms work along the serotonergic pathways in the brain and may support long-term rewiring of the neural networks. So, think of the anxious and repetitive thought-loops that hallmark conditions like addiction, obsessive compulsive disorder, and anorexia nervosa; psilocybin interrupts the distressing thoughts and prompts the brain to create a new groove or mental loop. With the new thinking comes new feelings and behaviors, all of which have been shown to be sustainable for months following one single dose.

Now, is it any wonder that we’re such big fans of mushrooms? Whether they are medicinal, psychedelic, or simply culinary, it’s clear that mushrooms are one of Mother Nature’s best kept secrets to unlocking true health and longevity. Don’t you think?

Refresh Your Sleep Hygiene with These Science-Backed Tips

You’re just one click away from FREE SHIPPING on any order!