Curious About Chaga? Here’s What Experts Are Saying.

Curious About Chaga? Here’s What Experts Are Saying.

Cha-cha-chaga! When it comes to medicinal mushrooms, Reishi and Lion’s Mane are all the rage. You can find them in countless herbal supplements, including a few of our own bestsellers. With an extensive list of possible health benefits, it’s no wonder that these mushrooms are taking over mainstream wellness. Lesser known, however, is chaga; we’re here to change that! If whole-person health is the mission, then chaga deserves its own spotlight on center stage. 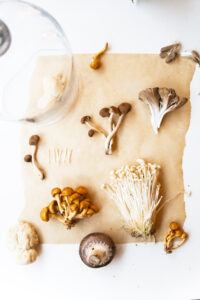 The King of Mushrooms. The Mushroom of Immortality. The Gift from God. Chaga has a multitude of nicknames; every single one attempting to accurately depict its healing properties and power. Like all medicinal mushrooms, this black, birch-like species dates back thousands and thousands of years. Chaga originally comes from Siberia and northern China, and has long been used for its anti-cancer, antiviral, and anti-inflammatory properties.

In the 12th century, Tsar Valdimir Monomakh was said to have used Chaga to cure his lip cancer. In the 16th century, it was used in Russian folk medicine as a remedy for cancer, digestive ailments, and even tuberculosis. These days, it can be found encapsulated into herbal supplements or blended into coffee-alternatives and teas.

Over the last decade, researchers have been investigating the validity of these ancient claims and the results have been promising. According to a study published in the International Journal of Medicinal Mushrooms, Chaga demonstrated clear anti-cancer effects and decreased tumor proliferation with little to no toxicity when administered in vitro. In animal models, the continuous ingestion of Chaga extract has even been shown to result in a 60% reduction in average tumor sizes. The most incredible part? This was after 16 days!

A second study revealed this mighty mushroom’s ability to alter the gut microbiota and shift the microbiome back to a healthy, balanced bacterial profile. In addition to its supply of gut-supporting micronutrients, Chaga also strengthens the immune system, decreases inflammation, and protects against liver damage!

Supercharge Your Routine with Chaga

If you’re ready to beat the bloat, boost your immunity, and experience the rest of Chaga’s benefits first-hand, then look no further! You can cross weekend foraging off of your to-do list and skip the slow, stovetop brew; instead, try Aura. We made it easier for you to add medicinal mushrooms, like Chaga, into your daily wellness routine.

Formulated with the most powerful herbal ingredients, Aura is the only supplement that harnesses the medicinal properties of functional mushrooms, adaptogens, and CBD to heal, seal, and protect your gut. With the highest quality Chaga extract, you’ll be radiating from the inside-out.`

The Fundamentals of Functional Breathing